I've held many jobs in my guild - newsletter editor, fashion show chair, vp, president, evening guild coordinator, program chair, among other functions.  My absolute favorite of them all, which also happened to be the biggest job, was program chair.

There are many many aspects to this job - my least favorite memory is of loading the back of my van with a stack of 6 ft folding tables to haul to a workshop. (I'm getting too old to do all that heavy lifting!) I found it maddening and frustrating to try to find affordable places to hold workshops. (With city budget cuts, few rec centers have hours that work, and library space is expensive! I still wonder what other non-profit arts organizations do.)  I didn't so much care for dealing with the logistics of workshops, but luckily, that part of the job was fairly concentrated in time.

But there were so many parts of this job that I thoroughly enjoyed. I love organizing information, so the computer part of the job was easy and fun to do. My absolute favorite memories are of hosting weaving teachers.  I liked it so much that I hogged that aspect all to myself - never did ask anyone else in the guild to host a teacher during my stint.  I was sure that if folks found out how much fun it was, they would want some of the fun for themselves. :-)

I'm all for taking on those big guild jobs when you've got the time and energy. For the first 15 or so years I was a member of my guild, it was important to me to work hard to help it survive and thrive. Now I'm in a phase of my life where my energy is committed to family things that need my time and attention, but I hope eventually to get back to doing more volunteer work with the guild.

So here's my Top Ten List of Good Reasons to Be Program Chair and Host a Visiting Teacher for your Guild:
I was recently very lucky to host Jannie Taylor for our guild - she gave a marvelous program on shadow weave. 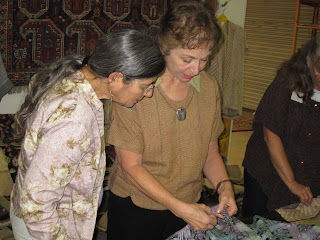 Unfortunately, I did not get to take her workshop (it was a Sun-Mon workshop, and on Sunday 9/11 I sang the Mozart Requiem and I couldn't get Monday off work.)  But I so enjoyed getting to know her, and she gave me this absolutely beautiful towel. 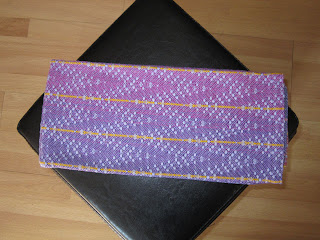 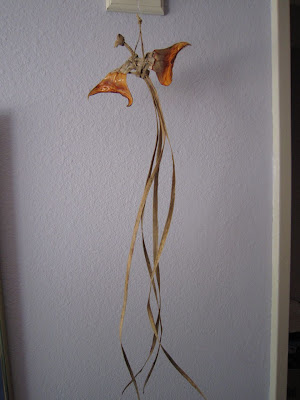 What a year 2011 is turning out to be. This feels like a "trial by fire" year - if you can get through the trials, you're stronger and you have proven your mettle. Or maybe I should say "when" you get through.

So what have the trials been?

The biggest stress has been our adventure with cancer. The day after Mother's Day, I took Eldy to urgent care. For several weeks, he had been weak and pale. We thought it was his new blood pressure medication. Nope. It turned out to be stage 4 colon cancer. He had surgery that week and the tumor was successfully removed (laparoscopically, amazingly enough!) A few weeks after that, he started chemo - a regimen called Folfiri, to be exact.  It's not fun, but has turned out to be effective. His CEA level was at 20 early on - last week it was 3.0. This is amazingly good news! He's lucky to have an iron strong constitution - so the side effects aren't as bad as they could have been. A few days ago he gave in to the hair loss - we started by buzzing his head, then shaving it. Looks kinda cute, I think! Yesterday he put a little mustang sticker tattoo on the front. I know I'm overusing the word amazing, but his unfailing humor has really inspired me. :-)

The other major stress has been my job. I've been working very hard, fairly long hours, and the office politics have been exhausting. I had thought that being on a spiritual path might help me be immune to that sort of thing, but that's not the case. And of course, the hardest part is that now that I finally have my beloved loom room weaving studio, I've hardly set foot in there - too many chores to do when I'm off work, and not enough remaining energy for embarking on new projects.

As for loss - it started with losing Joy in March. That still hurts. Then we lost a niece to suicide, and my sister has lost several sister and brothers in law to cancer this year. One of my dear weaving friends just lost her husband to a motorcycle accident.  I suppose the fact that I'm now 58 and have had so very little experience with loss before this year would indicate I'm very lucky. I was a Girl Scout - I should be prepared. But is it every possible to prepare yourself for loss? You don't really know how you're respond until you are going through it. No amount of speculation can make you aware of the fact that the hardest part of grieving occurs in the moments where you've forgotten about your loss, suddenly remember, and then can't breath for a moment.

But there's a corollary to the process - a very heightened appreciation for all that we usually take for granted. My relationship with Eldy now has an ease and intimacy that we've never had in 27 years of marriage. I'm so grateful for that, and I'm over the moon happy that the chemo is working.  I'm making a special effort to notice and appreciate the many wonders in my life - the joy we felt yesterday sitting in the backyard on a lovely summer day, watching hummingbirds darting around "protecting" the feeders. Later, we sat out front in the driveway with our neighbors' son Logan, the navy pilot, hearing about his adventures landing on carriers. I pressed a shutter button in my head - to make a note and remember a special moment. 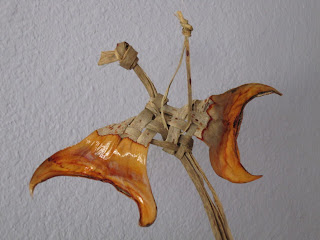 So, what I know is that life is good and precious. And I'll close with a close-up of the image at the top. I spent a lovely day in July with my friends Mary and Taryl at the Visions quilt gallery in Liberty Station, and found this dragon woven of natural materials. I was going to hang it in my loom room, but maybe I'll hang it near the front door instead - to remind me that treasures are woven from simple materials, and the greatest protection comes from love and creativity.
Posted by Deanna at 9:09 AM 3 comments:

I recently treated myself to a new toy that I'd like to show you.

A while back, I came across a lovely double hole rigid heddle on etsy.com. I marked it on my Amazon.com universal wishlist, but when I went back ready to purchase, the one listed had been sold and no more were listed.  So I emailed the seller, finnsheep, and whohoooo, another was made and listed. 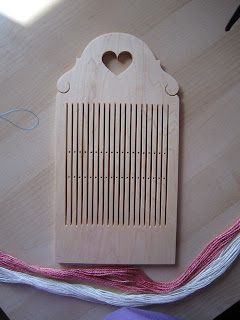 Isn't this beautiful! It's very well-made, and is the perfect size and weight. Those holes are pretty tiny, though, and the perfect tool for threading them is a dental floss threader (made for folks with braces.)  These come in handy so often, and for this, they are absolutely perfect. Here's a slightly out of focus picture of the floss threader ... 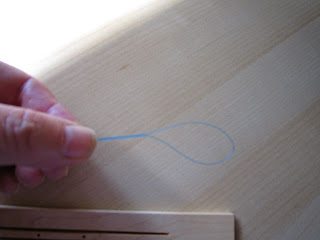 And here's a picture of the threader in action. 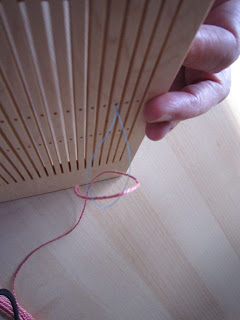 Next post (hopefully soon) will show the heddle in action.

And in case this has started heddle envy for anyone, I'll point you to the etsy shop for the maker
Fred Hatton, Woodturner and to his antique-spinning-wheels blog, and to the wonderful Weavezine article by Grace Hatton that first brought this type of heddle to my attention.

I love weaving narrow bands, and I love beautiful tools, and this is just the thing for creating that "all's right with the world" feeling.
Posted by Deanna at 5:01 PM No comments:

Yesterday was guild meeting and what a lovely day.

First, we just had a lot of rain, and to wake up to sunshine and oh-so-fresh air was divine.

Second, the program at our guild meeting was one of my favorite topics, given by one of my favorite weaving teachers. Jennifer Moore talked to us about Mathemagical Design. Here she is holding one of her fractal double-weave pickup samples. She combines an amazing design sense with a beautiful use of color that is just thrilling. 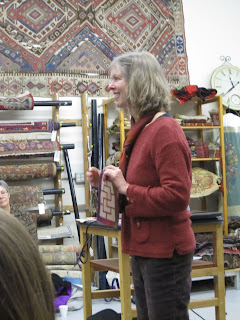 Another fun thing happened during the business meeting - I was given the following "tool" for free. The only requirement is to report back whatever I discover about its function. It looks homemade - you can see there is one hole drilled in the far end of the board, and two in the near end.  the upright part consists of two pieces, with two holes drilled in each of them. 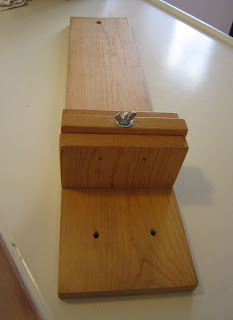 In between them, there is a lower piece of wood, and the top piece can be removed. It is connected with a bolt, and secured with a washer and wing nut at the top. In the second photo, you can see that top piece removed. 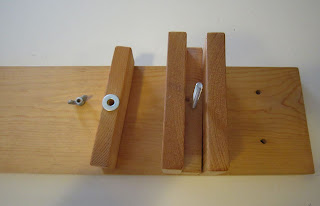 So what this is for? I thought maybe for clamping the end of a warp to use for tablet weaving, or perhaps for band weaving with a small rigid heddle. Or maybe it's used for twining? What are the holes for? Anybody know?
Posted by Deanna at 8:28 AM 2 comments:

I guess I'm not very good at this blogging thing..... once again, it has been a very long time since I posted. I can give oh so many excuses.... the full-time job  (thank you Universe for the opportunity to clear debt, and thank you for the brain cells that still work),  the music ventures (still singing with the La Jolla Symphony Chorus - we're working on Bach's St Matthew's Passion right now, also starting a new 20 voice sacred choir called HeartSong Chorale - heartsongchorale.blogspot.com.)  The result of all the busyness has been that I have spent very little time in my new and beautiful loom room. I still hope to change that, soon, real soon.

But that isn't where my attention has been lately.  For the last couple of weeks, I have been consumed by grief.  In the early morning hours of March 7th, I lost my shadow. My sweet poodle, Joy, passed away. I thought my heart would break.