I don't have anything weaving related to post today, primarily because of my recent visitors. Last week, a pesky little cold virus moved in for a while. Thankfully, it's now gone. And come to think of it, the gift of small bouts of sickness is the opportunity to sit, rest, watch the backlog of DVDs from Spiritual Cinema Circle that have accumulated unwatched. I guess it really is true that even the bad stuff holds something to appreciate. 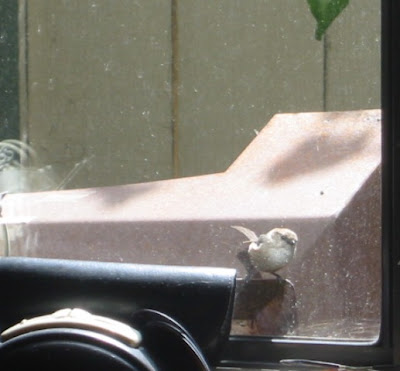 I've had another little visitor lately, too. For about a week, I've heard this little tapping sound on the window to our home office. It's usually little double taps, then silence, then another double tap. A strange little bird, probably a sparrow, has been visiting. He comes to one window under a tree, hangs on to the screen, cranes his neck as if to check me out, then flits away. He bounces from one branch to another like Tigger, then flies around the corner to sit on a piece of metal outside another window. That's where he taps on the window pane. It's embarrassing to see how dirty the window is here. 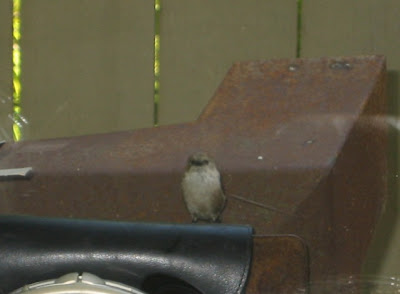 It's funny - most of my adult life I haven't paid much attention to birds, and now they keep popping up. When I was a young girl, I tried to rescue several birds. We had a big picture window and they would hit the window and lie stunned on the ground for a while. We had cats, so I felt compelled to try to help them. Once I even raised a tiny baby bird - taking it with me everywhere and feeding it every 2 hours. When it was big enough, I left it at home in my room. Sadly, I got home from school one day to discover it had learned how to fly, and had flown into my bedroom door and died. For a long time after that, I refused to play outside, petrified that I would encounter an animal that needed my help, and that I wouldn't be equal to the need.

But that was a long ago grief, and now this visitor seems more light-hearted - as if he's tapping on the window, suggesting perhaps I would prefer to go OUTSIDE and play?

On another note, I've been seriously procrastinating lately. I needed to file a claim in Small Claims Court up in Orange County against a company that still owes me for work I did last September. They kept saying they had an investor coming on board and "within a few days we'll have the money and you're at the top of the list for payment." But they've been saying that since January, and even my patience has limits. I don't know why I was so afraid of filing, but today I finally moved through that fear, and was even able to file online. Very easy. And now it is DONE. Lots of creative energy gets freed up when you tackle something you've been delaying for too long.