Okay, to answer Ruth's questions about the cardweaving warps shown in the previous post, here are a few photos and some explanation. 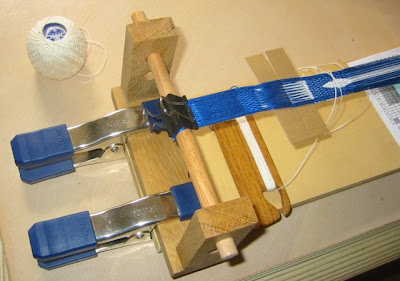 This is the "band end" of the loom. It consists of a board of wood with tensioning blocks (from Linda Hendrickson) clamped on each end of the board with grip clamps. (Originally, I used one clamp on each end, and the other clamp was intended for clamping the whole thing to a table. However, I discovered that using two clamps kept the tensioning block from torquing, so I used it as shown. You can also see that the weaving is currently clamped to the post of the tensioning block with a binder clip. I would prefer to use a clamp - wrap the band around the post and clamp it - but... I couldn't find a clamp quickly, and was trying to get prepared for the demo, so I just used the binder clip. One nice thing about that - when you beat in the weft, sort of grinding to get a nice tight beat, you can push down on the "handles" of the binder clip to increase the tension. 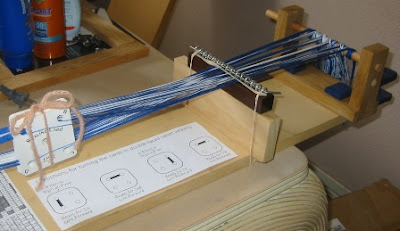 This photo is looking toward the other end of the loom. You can see the cards hanging in the warp, then the warp spreader, then groups of warp threads hitched to the opposite post. The warp spreader is also from Linda Hendrickson - it's the original style she used to sell. I've used a rubber band to hold the metal post in place. I prefer not to have the warp spreader hang on the warp, so I put a block of wood under it, and used another larger rubber band to fasten that to the base board. The graphic you can see there is an enlarged image from one of Linda's articles - showing the position of the A-B line for each pick in double-faced tabletweaving. 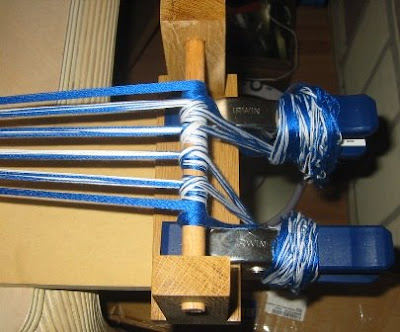 This last photo shows the other end of the "loom." Again, grip clamps attach the tensioning block to the end of the board. Groups of warp threads are tied to the post of the block. I struggled to find a good knot for this - I wanted to find a knot that would hold firm, but also be easily adjustable to let out more warp. I found the hitch shown here. It's not quite what I want, but was okay for the moment. It didn't hold quite tight enough, so I then took each half of the warp and wrapped it around the grip clamp. (If I can find the web sit with the diagram of this hitch, I'll post that later.)
Posted by Deanna at 11:16 AM 3 comments: