It's been quite a while since I posted, and a LOT has happened in that time, so for the two of you who read my blog from time to time, I'll go ahead and start catching up.

The last time I posted, I had just moved my big loom into my new loom room, and got everything running, and even got a USB adapter to connect my Toshiba laptop to the dobby.  Sadly, life has been pretty busy and complicated in the last couple of months, so I haven't done any weaving. Soon, real soon, and when it happens, I'll announce it here first. :-) 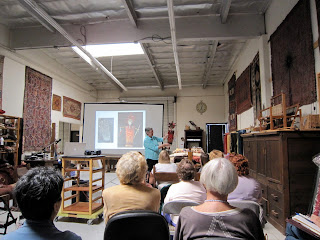 Also on the weaving front, the San Diego guild has begun meeting at San Diego Rug Cleaning Company - and what a delight!  Instead of basketball noise, we have the ambiance of lovely color and texture and cool tools all around. (You can see Rebecca Smith giving a presentation on her artwork based on petroglyphs in this picture.)

So what has been going on?  Well, that full-time job has cut into the playtime in a serious way, although it has also cut into debt in a big way, too, for which I'm enormously thankful.

On the music front, I've been busting my chops learning Beethoven's Missa Solemnis, which we will be performing on December 4th and 5th. This is probably the most difficult choral music I've ever sung before, so I expect to feel both joyful and immensely satisfied when we're finished!  In addition to all that has been going on with the La Jolla Symphony and Chorus, I've been working with Carl Martens to begin a new sacred choir in San Diego. Many, if not most, New Thought churches (and I go to a Unity Church, which is part of that movement) have contemporary music during the services. It's often soloists with a band, doing pop style music. There might be a choir, occasionally, but the choir sings backup for a soloists, doing..... pop style music.  I discovered in the springtime that Carl has a great deal of experience as a choral director,  and suggested to him starting a sacred choir, and it's going to happen!  We've arranged for a place for rehearsals, and have scheduled auditions for the second week in January, and have a blog all setup. We are planning to have a group of 20 singers. I can hardly wait!

What else? I got my obligatory fall cold, and am just about recovered from it.  I'm beginning to suspect sugar - I normally avoid it, but tend to indulge on Halloween (while handing out candy, of course). And I'm starting to realize that every year, I get my fall cold right after that. Maybe it's time to buy the non-chocolate (and therefore non-tempting) kind of candy to hand out.

Also, on the list of challenges - my beloved dog Joy is having a harder and harder time getting around. She's almost 15, and it shows. Her back legs aren't working very well, and she's getting very skinny. The good news is that she doesn't seem to be in pain, and she's still eating well. But walks are shorter in distance and take a lot longer. I'm glad I still have her with me, and intend to enjoy every single day.

So that's it from here. I've got several weaving related things I want to talk about (incredible customer service from Fireside Fiberarts, the new edition of Kati Meek's book, among other things) but that will wait for the next post.  I promise not to wait so long next time.

Last, but not least, I'd like to say thank you to Sue, of Life Looms Large.  Since she's started the color of the month posts on her blogs, I've found myself noticing my environment much more than I ever have before - and not just the colors, but seasonal patterns that are unique to this area. It's a nice feeling to be more aware of things I've previously taken for granted.
Posted by Deanna at 3:55 PM 2 comments: