On a Different Note

My summer started with an excursion to New York City for Memorial Day weekend - to sing at Carnegie Hall!

This was my third year singing with La Jolla Symphony Chorus, and when I found out that this summer's trip would be to Carnegie Hall, I knew I wanted to go. I missed the previous year trip to Ireland (couldn't afford it at the time), but it was clear this would be a once in a lifetime chance, and I'm so glad I participated!

A few weeks before the trip, we performed here in San Diego - singing the same piece we would be singing in NY - Benjamin Britten's Spring Symphony. It's really a lovely piece - in several parts - each a setting of a poem by a different poet - beginning with thawing of winter chill, and ending with what I thought of as drunken arpeggios. It is at times thoughtful and at others exuberant. It sounded good, I think, in Mandeville Auditorium where we normally perform - although we were on risers behind the orchestra, and I wish they had monitors because at times it was hard to hear the soloists over the orchestra.

But my oh my - singing at Carnegie Hall was a whole different experience. We had several rehearsals in NY - one on Friday morning at the hotel - out first chance to sing with some of the alumni who were joining us there. It went well. Saturday, we were bussed to Carnegie Hall for our dress rehearsal there. It was a little chaotic - 120 singers crammed into a rather small rehearsal space - we did a few warmup vocal exercises, and then onto the stage.

Everything I've heard about the incredible acoustics at Carnegie Hall is true!  Wow! The orchestra that played with us was superb and very professional (we were stunned to learn that they received the music that Thursday!) The soloists sounded marvelous.  For me, the only challenge was my feet - we stood the whole time, and in spite of wearing very sensible shoes, my feet were killing me.

Sunday night was the concert. Thankfully, we had a larger space to line up and prepare. Everything went smoothly, and the music began. We sounded better than we have ever sounded before. It was truly stunning - the pianissimos were delicate but oh so clear and the fortissimos - in one part, I could feel my whole face vibrating. Except for the tenor soloist skipping half of the last page, the whole thing was just superb. 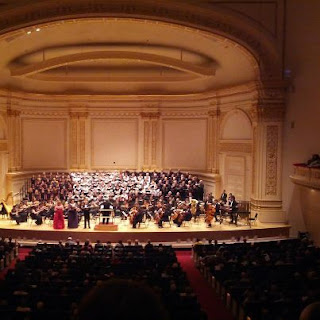 If you enlarge this, I'm in the back row - second woman from the right (white blouses).

And what did I think of New York? I had such a wonderful time there, and really enjoyed seeing it, which caught be by surprise. I went there for a business trip when I was in my 20's, and did NOT care for Manhattan at all - found it scary and dirty and felt like I always needed to watch my back. Either I've changed, or NY has, or both. :-)

My friend and neighbor of almost 30 years - Cinda - was my roommate. We had a great time. We walked through Central Park to the Metropolitan Museum of Art. We saw a show (Million Dollar Quartet, which was wonderful.) We visited the Empire State Building (the one thing I would skip on a future visit.) We walked and walked and walked!

Spring Symphony in NY made for a lovely transition to summer - a once in a lifetime experience that I'm so grateful for.
Posted by Deanna at 2:54 PM 1 comment:

Hmmmm, what did I think about Convergence?

Well, first, I must admit that I have a rather strange relationship with Convergence. I have only attended two Convergences in the past as a full registrant - the first time in Minneapolis in 1994, and the second in Atlanta in 1998. I attended Convergence in Tampa in 2008, but only got day passes, and I did the same thing in Albuquerque in 2010.

I'll describe my earlier experiences with Convergence below (for those who make it past this one. ) :-)  I'll start out by saying that I feel a little like an imposter these days - haven't touched my floor looms in quite a while, and have only done a little spinning and band weaving lately. I feel a little out of touch with the weaving world right now - still interested, but not as fully engaged as I used to be. With this one being in Long Beach, I decided it was too close by to miss. 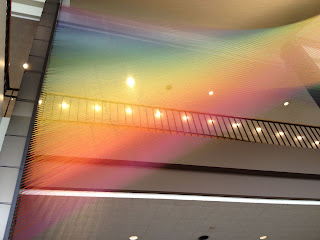 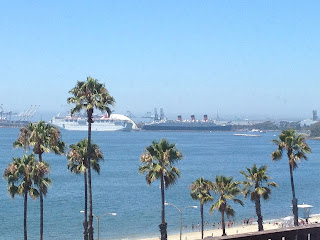 What I Wasn't Crazy About:
Am I glad I went? Absolutely! Will I go again?  I suspect I may not make it to the next one - with this one being on the far left, the next will probably be on the far right side of the country. Maybe, though, by the time the 2016 conference happens, I'll be retired, it will be centrally located, and I'll be weaving again, so I'll feel like I belong. Hope springs eternal.

So what were my past experiences with Convergence?

For the first, I was in deer-in-the-headlights mode most of the time - totally awed by the entire experience, except hours on a tarmac in the next state when my plane couldn't land due to thunderstorms and then had to go elsewhere to refuel. Because of that, I missed the keynote address. But.... the goody bags really were goody bags back then, and since I was employed, I had money to spend. This was also the first time I met some of my best friends - the folks from the Crafts Forum I had met on Compuserve (CIS). Putting names with faces was confusing, but delightful. Everything was interesting, and the hardest part was keeping my energy up because there wasn't much time between seminars. It was a very well-run conference, and I have very fond memories.

For the second, I was still employed, and once again, enjoyed the reunion with my CIS buddies. Two of them were my roommates, and we had a blast! Again, it was difficult to do everything because I had seminars scheduled for almost the whole thing. The venue was nice, except for the elevators which were notoriously slow, and for which many folks spent a long time waiting. I think we were on the 11th floor, and decided to walk downstairs once - only to discover at the ground floor that the door was locked. We had to walk back up several flights to get out!  Except for that, everything was well-run and again, I had a marvelous time. I wasn't quite as much of a newbie by then, and didn't find it quite as overwhelming.

By the time Tampa rolled around, I had been unemployed for quite a few years. I'm still amazed that I was able to scrap together enough to go at all, but again, we had a CIS reunion. I had just started on some new contract work right before the conference, so I wasn't too strapped. This time, we rented a condo together - got a good deal on rent, and I got a great deal on Southwest airfare. Again, I had a marvelous time, in spite of not being able to buy much of anything in the vendor area. I liked Tampa way more than I had expected to. Since I didn't register, I didn't have any classes, so there was more time flexibility, although there were still a few people I only saw in passing that I would have loved to have chatted with.

Albuquerque was a similar situation - a few months before, I started my current job, but money was still a little tight. Our CIS group rented a house - wonderful place - our landlord even gave us a Tai Chi lesson. We got day passes  for Convergence 2 days in a row - and had some other excursions to the surrounding area, including visiting my friend Gay Sinclair and her husband at their ranch near Santa Fe.

Posted by Deanna at 6:23 PM No comments: