On this day, one that is incredibly joyful for me and millions of others, I thought it appropriate that I would finish winding on a new warp. This is significant for several reasons...

First, it's the first new warp I've put on my David loom in quite a while. It's a sign that the new way I began the first week of the year will continue. Second, beaming a warp is by its very nature a polarizing event....all the threads are lined up, nice and neat, shoulder to shoulder, so to speak, for a common goal. 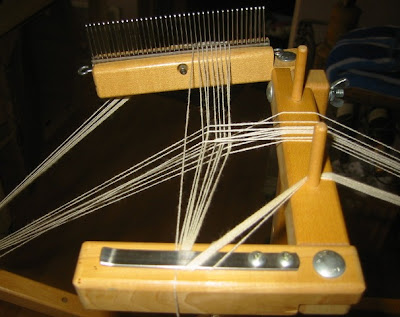 This is a snapshot of the main mechanism of the warping wheel. You can see that the thing holding the reed is a little cattywampus - actually, the supporting bracket broke. It's been glued together with gorrilla glue. I'm going to contact AVL and see if I can get a replacement bracket. Second, you can see that this is one of the early warping wheels - it's got pegs on the arms rather than spools. 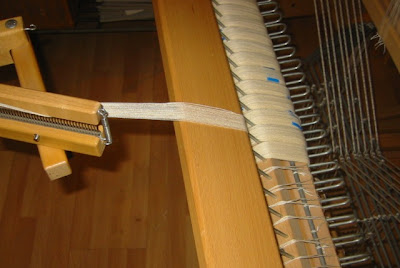 The picture above shows the winding on of the last section of this warp. My process of winding on is way too fiddly - I hover over it, to make sure no threads stray into adjacent sections. I really need to rig up something with guides to put on the back beam. I've got some little metal things that fit over the U wires, but unfortunately, on this loom, they stick out too far and hit the back beam, so I can't use them. I should try to find some bicycle tubing to try. 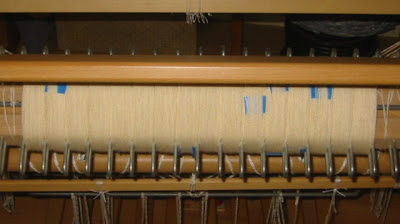 And here's the new warp. The little blue spots are pieces of painters tape.

This is not a long warp - only 6 yards. I'm planning to do some experimentation. It's 8/2 cotton at 20 epi. I'm planning to try doing towels with a band in taqueté with the body of the towel in plain summer and winter. I'm not sure if the band will be too heavy - I'll keep you posted.
Posted by Deanna at 10:23 AM 3 comments: 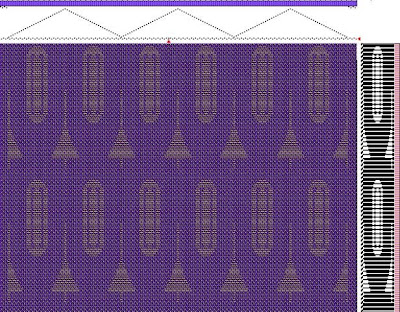 Lately, I have been fascinated with an article from WeaveZine - Florida Fantasy, by Jannie Taylor, in the Fall 2008 issue. I've got this incredible loom with a multitude of harnesses, and we all know that one of the unspoken weaving rules is that you MUST use all of your harnesses whenever possible.

The article describes a fabric the author wove with images of palm trees and flamingos in double two-tie unit weave. Did I mention that a few years back I was totally consumed with double two-tie unit weave?! At the time, however, I didn't have all of these shafts - it was after I had to sell my AVL, so I only had an 8 shaft floor loom. This weave structure can really consume lots and lots of treadles, so I shelved the idea.

The good thing about ideas is that they never really go away. They eventually resurface - teased out of retirement by some sort of reminder.

So.... I got out my weaving software - Fiberworks PCW - and started to play. At first, I thought I could create a profile draft, do a block substitution for double 2 tie unit weave, and everything would be hunky dory, but it didn't really turn out that way, so I shifted strategy. I created a threading similar to the article, but using ALL of my shafts (the article is for 24 shafts). To create the design motif in the liftplan, I needed to learn how to use the sketchpad feature of PCW. Very cool, and lots of fun to play with, and neat all the different transforms available. I decided I wanted to weave an image of shuttles and spindles.

In the article, therre is a short paragraph that says "After that, there are several steps before you actually have a weaving draft: space the palms throughout the fabric, add the tabby shots, add the ties to the pattern shots, add the color, etc." This is similar to mathematical proofs that summarize pages of steps with "whence." But... the truth is, those were EXACTLY the steps I needed to take.

I discovered I could invert the pixels on the sketchpad, copy it, and paste it into shafts 3-29 on the liftplan. I edited the liftplan to alternate 1 and 2 and to lift 31 and 32 for the border. When I liked the results, I used the Weft Menu to add tabbies. Then I played with colors until I liked what I saw.

So this will be the next warp on my big loom. I have, by the way, decided to name her. I'm not a big one for naming tools, but it occurred to me that Meghan would be a good name - Meg for Megado and Han for handweaving. A stretch, I know. The bonus is that when I was pregnant many years ago, the name I had picked out if I had a daughter was Meghan. I have two sons, so the name isn't taken in our family.
Posted by Deanna at 3:41 PM 2 comments:

Yesterday, my friend Mary and I went down to Liberty Station to see a wonderful quilt exhibit called A Full Deck at the Visions Art Quilt Gallery. Very cool exhibit - each of the quilts is based on a card in a deck of cards, and the range of techniques was awe-inspiring. Some of them were incredibly clever, too! If you're in San Diego, and have some time this weekend, check it out - tomorrow is the last day.

It was also cool to see the place - San Diego Creative Weavers Guild has been talking about possibly getting guild space at Liberty Station. This would be so good, for so many reasons. We currently meet at a rec center, and since our meetings are on Saturdays, we are accompanied by the basketball noise from the gym next door. Since the city has cut back hours at the rec centers, we can no longer stay and have hands on activities in the afternoons after our guild meetings - we have to stack the chairs and be out by 12:30. The main thing this place has had going for it the last few years is a) it's incredibly cheap (and with shrinking guilds, that helps) and b) they have allowed us to use cabinets in one room and a hallway to store our guild library and some guild equipment. That's a feature that's hard to duplicate anywhere else.

So, I've got my fingers crossed. If we have meeting and gallery space at Liberty Station, perhaps the added visibility would also help us to attract new weavers. 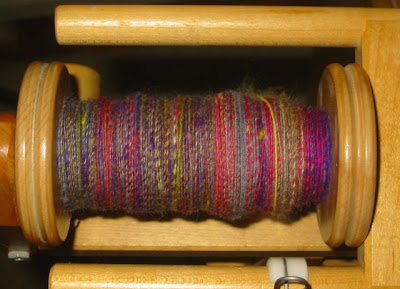 My poor spinning wheel has been sitting idle for a long time (not as long as the looms, but still) so yesterday, I brought it downstairs, got out a batt and yep - spinning is like riding a bike - even if it has been a while, it seems to come back to you fairly quickly. This was a blend from a Deb Menz workshop I took at the southern California regional conference back in, yikes, 2005. Well aged, and a delight to spin! I've got several more batts - may try to do one with a thicker singles. This bobbin needs to be plied, and I'm not sure if it will muddle the colors too much.

So far, so good, regarding my intention to start the new year with fun and creativity!
Posted by Deanna at 9:22 AM 2 comments:

Miracle, you say? Isn't she being a bit dramatic.

Well, yes, that is true. But I do have a miracle to report. First, there's the fact that I have posted to my blog TWO DAYS IN A ROW!!! That in itself is jaw-droppingly awesome.

I decided this will be a year with NO resolutions. We don't need no stinkin' resolutions.

But last night I went to a burning bowl ceremony at the Unity Center. This is a powerful exercise, where you meditate, then write on a piece of paper all that you wish to release from the past year. We went single file past grills with blazing fire, and got to toss our lists into the fire. Then we went through another meditation, followed by writing down what we wish to be, do or have in 2009. The final question, to ponder and take home, was "Who must I become to bring this forth?"

I thought about it a lot last night. The result was that I woke up this morning and decided to spend the day doing the things I love that I end up seldom doing due to fear or procrastination.

So, I ...
This is special for several reasons. Mainly, it helps justify the fact that I have this incredible loom that I haven't used enough since I acquired it. In addition, this weaving is evidence of getting over some hurdles that have kept me away from the loom. (Sadly, they don't have to be very high hurdles to stop me cold.) For one, my wonderful loom was donated to our guild when one of our members passed away a couple of years ago. I bought the loom from the guild. But... there were a few things missing. For one thing, it has a fly shuttle mechanism mounted on the loom, but her children decided to keep all of her shuttles for memories of their mother. I could understand that, but they included the fly shuttle that fits this mechanism. I have almost purchased a few fly shuttles at guild sales, but careful measuring revealed that they were too wide to fit my loom's mechanism. A while back, a member of my study group gave me a fly shuttle she was no longer using. But... by then the loom was gathering dust.

Well, today, I got out that fly shuttle, which works fine. I didn't get bogged down when I had to go find a crochet hook that would fit for feeding the thread through the tension gizmo. I actually found the weft yarn I had been using. I started out with only one pirn, wound that, wove, wound it again, wove. Tedious, because the weaving went fast with the fly shuttle, and I was having to stop frequently. So I went and searched on one of the shelves of "stuff", and lo and behold, I discovered a bag of pirns, all of which fit this shuttle. Yeehaaaaa!! So I wound a bunch of pirns and spent some blissful time weaving.

This is the tail end of a warp that was used for something else. I don't think this fabric is particularly successful - the warp is a rather open sett, but I still find this wave pattern rather pleasing, and the weft is a cotton/acrylic baby yarn, so it is very soft. I'm thinking it may end up suitable for a baby blanket - if I've got enough warp left. 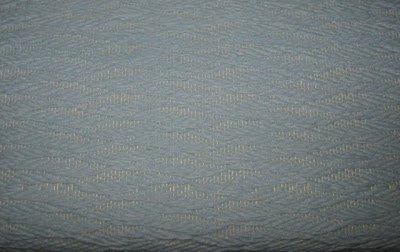 Whatever - the important thing is that I'm weaving, and have cleared a hurdle that has held me back for a while. Now I just need to figure out how to get the rotary temple working. I purchased the temple gizmos from the seller's husband, and the brackets for the track were mounted on the loom already, but the track was missing. I purchased it from Fireside at a regional conference, but it came without bolts, so the next step is to track down what size bolts I need to mount the track on the brackets.

For now, I think I'll go spin for a while, and bask in the happy glow.
Posted by Deanna at 4:00 PM No comments: