I'm still resisting weaving for some strange reason. Like I'm waiting for some giant cue from the sky or something. It bugs me, but it is what it is, so I guess I'll wait till this resistance fades.

Plenty has been going on. I had my day in court last Friday. It was unpleasant but... I got a judgment in my favor. Not sure how much good that will do, since the company that owes me this money is apparently in dire straits. The judge was more sypathetic to them - which was really frustrating, but I keep reminding myself, I got the judgment, and that's all that counts.

Now to the good stuff. My birthday was Bastille Day - I had a marvelous time! My friend and neighbor Ann Marie went to my favorite museum with me - the Mingei in Balboa Park. We had lunch in the outdoor cafe by the art museum and just had a marvelous time! The Sunday before that, I had a fun lunch with my spinning buddies, Mary Dawn and Taryl. Taryl brought a delicious white chocolate and fruit cake. 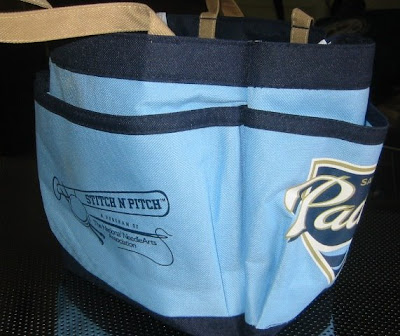 It's been hotter than usual here in San Diego, and weather whimp that I am, I've definitely been in a low energy phase. Mary took me to a Padres game this past Sunday - it was Stitch and Pitch day - got this cool bag, started a simple knitting project to have something to take with me. We rode on the trolley - missed one exchange so we got to the game late, but that was okay. It was my first time riding on the trolley ( I live north of San Diego and it doesn't come this far up.) The Padres had a miserable game, which apparently wasn't a big surprise these days. Still, it was a fun afternoon in the sun. I like this simple scarf I'm working on - still using the turquoise alpaca I used on the last project, but this time I'm knitting a narrow lace scarf with a sort of feather and fan stitch. 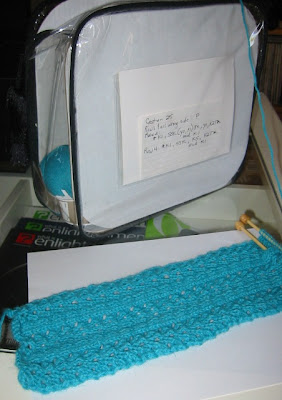 And for the naked part - poor Joy has really suffered with the heat since her curly coat had grown so long. The groomer had a cancellation yesterday, so Joy got a super short summer cut - hence the nekkidness. Sure wish I could get my hair cut and look suddenly skinny. 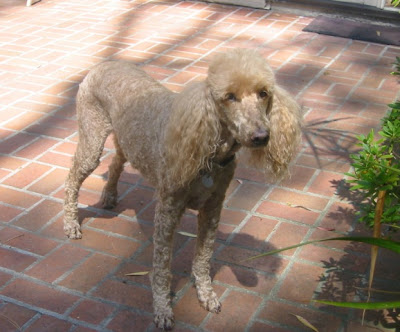 Our guild doesn't have meetings in July and August, but we still have access to our rental space, so often, Bev, the education chair, will line up classes. I like to do cardweaving - the American name - same thing as tabletweaving- so I decided to teach a class on making Tabletwoven Shoelaces after seeing the cool article on Weavezine on Inklewoven Shoelaces written by Daryl Lancaster's daughter Brianna.

I prepared kits in baggies - each containing warps for 2 shoelaces, 2 EZ Bobs for weft, a loop of thread for securing the far end of the warp, a safety pin to secure the near end to a belt, a binder clip to hold the cards secure when you're idle, some toothpicks to even things out at the start, an index card with an arrow on it (used to keep track of which direction you're currently turning, in case your mind wanders), and last, a piece of waxed paper with 4 little squares of clear packing tape (for wrapping the ends after weaving.)

I started by giving a demo with my giant cards so everyone could see the twining that happens with tabletweaving. Then I got everyone setup - the loop of thread secured to the support bar of the table with a larks head knot, then with another larks head to capture the knot at the end of the warp. The near end of the warp was tied in a knot and safety-pinned to the belt (or around the belt, if necessary.) We wove in a header of toothpicks to even things out, then launched into the weaving. 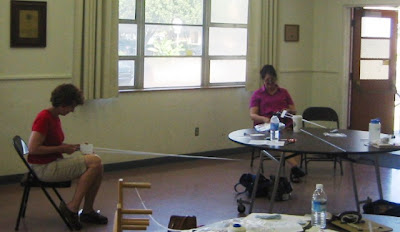 and the other Mary and Joyce... 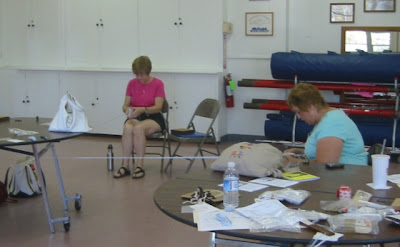 And Karen and Taryl... 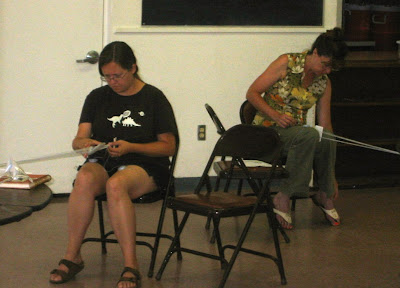 After weaving for a while, I had everyone take a break, and talked about some of the options - 2 vs 4 cards, size of threads used, options for holding the weft, different turning patterns. 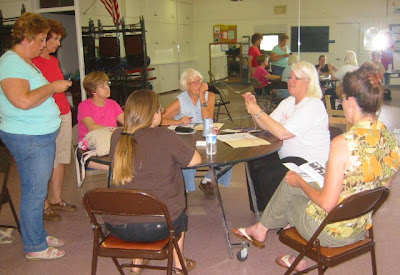 All in all, it went pretty well. Turns out the EZ Bob thingies weren't ideal for holding the weft threads since I had probably overfilled them and the thread was fairly fine compared to knitting yarn that you usually use these for. Floss bobbins might be a better choice. I had everyone using two wefts - a trick I learned from my friend Ruth MacGregor (www.spinningforth.com) which makes it easier to tug on the wefts to keep the edges neat and tidy. I also suggested they keep a finger in the shed until they are ready to turn so that the band doesn't tend to twist or flip over.

It will be interesting to see how many of them bring their finished shoelaces to the September guild meeting. :-)